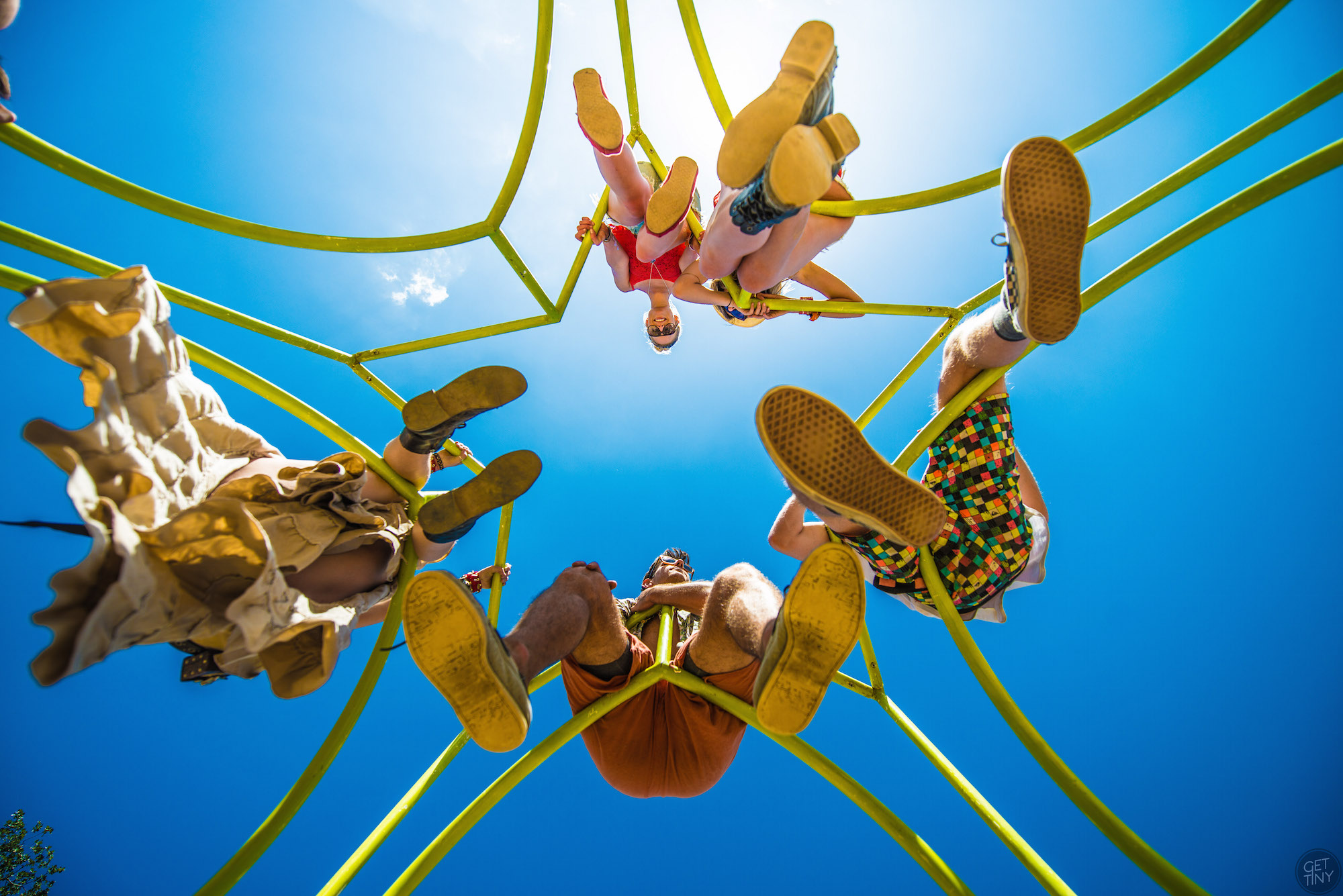 Written by Nadia Ibanez, Photos courtesy of Lightning in a Bottle

I should have a section on Wander for “Wishful Thinking” posts. It happens just about every week where I’m sitting at my 9-5 job and get a crazy inclination to check out a cool new art show, concert venue, totally crazy event, or new hotel — you name it, I’ve done it. Or, at least I’ve planned to go to something and then plans/universe turned me in a different direction. A couple years ago, I made the intention to check out Lightning in a Bottle at some point in my 20s/30s. And if you know me, you know this event is 1000% Nadia friendly. 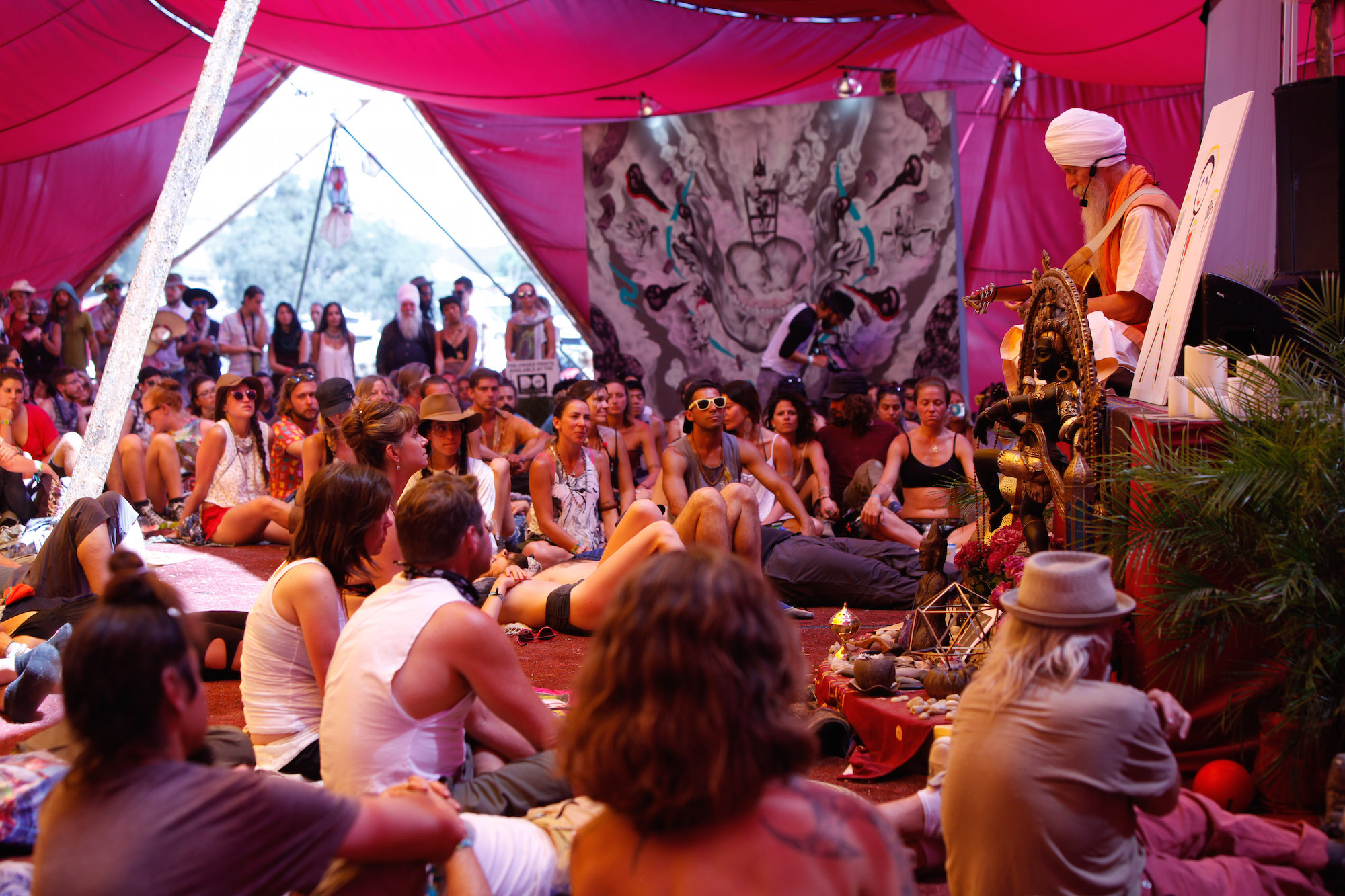 Over Memorial Day weekend, thousands and thousands of people convene for a six-day festival of amazing music, yoga, live art installations, a meditation temple, cooking classes and demos, booze, and environmental consciousness in the form of food, vendors and much more. Essentially, people going to LIB are seeking full immersion in a culture that embraces community, self-awareness, the healing benefits of music and yoga, and the act of befriending strangers with common interests.

This year, Lightning in a Bottle will return to the San Antonio Recreation Center in Bradley, CA. Music headliners include some of my favorite artists like Chet Faker, Grimes and Jaime XX and a boatload of other DJs and musicians. While some people are going for the dance and EDM scene, I think I’m more excited about the yoga and meditation aspect, along with spending a couple days out in the wilderness and under the stars. For a hippie, festie girl, this would be a dream come true. Now it’s just a matter of finding a squad to join me.

For more information, check out lightninginabottle.org or check out the 2015 video below. Hope to see you there!

Some peeps (ahem, my photographer for instance) would say that I’m a festie girl. I travel throughout the state for three-day music festivals. I’ll drop almost $400 for a weekend pass to something. I don’t scoff at body paint, metallic temporary tattoos or putting flowers and ribbons in my hair. I’ll put on a flowy dress and cowboy boots. And I’ll f*cking dance my booty off with strangers in front of the main stage without skipping a beat.

As I’m rounding out my first year in the City, I’m finding about all of the annual street parties, SF-centric holidays and music festivals. The Hardly Strictly Bluegrass festival was last weekend and I finally had the chance to experience it for myself. Three days, seven stages, in the middle of Golden Gate Park. Oh, and it’s a totally free event. I mean…if you’re in the city and don’t check it out, you’re doing it wrong.

SF venture capitalist and philanthropist Warren Hellman came up with and funded the non-commercial festival to focus on the music, the community and the absolute beauty of the venue. The first event was held in 2001 and more than 750,000 music lovers trek to the GGP each year.

Because Hardly Strictly is a non-commercial event, don’t expect to find any booths sponsored by the likes of Google, Spotify, Chevy or any other corporations hawking their brand and wares like you’d find at Outside Lands or other festivals. But rather, you’ll find groups of people bringing in their own lawn chairs, blankets, booze and food intending to spend the entire day in front of their favorite stage. The idea of “pack it in, pack it out” is huge at Hardly Strictly and it was kinda amazing to see people picking up after each other and not trashing the park like you’ll often see at festivals.

Kevin and I ran around the festival all weekend and shot crazy concert goers, musicians, free-lovin’ drifters and everyone in between. We hope you enjoy this photo gallery. END_OF_DOCUMENT_TOKEN_TO_BE_REPLACED

Summer season is concert season. That means that the Wander Crew is gearing up for a lot of festivals, concerts and tours in the next few months. While one of our editors is heading to Outsidelands in San Francisco, and another is covering San Diego festivals, we are all letting our Sanrio-loving selves get super excited for Hello Kitty’s Supercute Friendship Festival, launching in Los Angeles on June 11.

For those of you who are unaware, Hello Kitty isn’t just for little girls anymore. We loved getting to know all of Hello Kitty’s universe at Hello Kitty Con earlier this year, and her friends of all ages came together to enjoy the fancy free fun that comes with Hello Kitty and her fantastic friends. Hello Kitty’s Supercute Friendship Festival will be a great way to dive right back into that world.

If you are looking for a Keroppi purse, a Badtz-Maru blouse, or even some Pochacco, you’ll be able to grab one in between the live interactive shows, photo ops, and a few Sanrio surprises. Fans are invited to put on their finest Hello Kitty gear, and enjoy all of the elements that the Friendship Festival has to offer, such as:

There are various ticket options available, including a VIP Platinum Bow  experience that lets you take photos with Hello Kitty herself!

As if we needed another reason to visit New Orleans — all those who have a penchant for art, literature, music and culinary bliss can flock to the historic French Quarter for the 29th annual Tennessee Williams/New Orleans Literary Festival, March 25-29, 2015.  Known for A Streetcar Named Desire, Cat on a Hot Tin Roof, The Glass Menagerie, Hard Candy and more, Williams lived in the city of New Orleans, revolutionizing the way people saw plays, literature and the world.

The event takes place at 16 French Quarter venues in New Orleans over the span of five days, allowing for visitors to truly immerse themselves in the splendor of the Big Easy, just as Tennessee would have wanted it.

“Tennessee Williams is universally loved,” said festival representative Ellen Johnson. “We celebrate Tennessee because when he was living here, he was only Tom. He became Tennessee here.”

END_OF_DOCUMENT_TOKEN_TO_BE_REPLACED

Everyone has big fireworks plans for the Fourth of July, but for firework fanatics, that’s definitely not enough. With that in mind, Knoxville beckons folks from all over the country to head to Knoxville Boomsday 2014 on August 30 to watch more than five tons of dynamite paint the sky.

Fireworks can be viewed from a number of locations throughout downtown Knoxville, Boomsday’s main festivities will happen on on Neyland Drive.

“Boomsday is one of the Southeast’s premier events and the largest Labor Day Weekend Fireworks Show in the nation. We are beyond thrilled to continue to present it to hometown folks and visitors from all over the country,” states Visit Knoxville president Kim Bumpas.

Since 1988, the Boomsday Festival has been a successful one-day event that brings hundreds of thousands of people to Knoxville for a day of food, fun, live music, and the biggest boom in the nation.

Boomsday has traditionally taken place on the Sunday prior to Labor Day, but this year’s festival has been moved to Saturday to accommodate the University of Tennessee season opener scheduled for Sunday, August 31. This led to the perfect opportunity to sync a national holiday with fireworks.

Boomsday is more than just shock and awe, as Visit Knoxville plans to offer special entertainment and treats for guests starting at 3 p.m. Participants can enjoy music from a Knoxville-based band, The Black Lillies, which was recently named among Rolling Stone Magazine’s “10 New Artists You Need to Know: Summer 2014.” Other performers will take side stages, including Rodney Atkins and Native Run.

For those who appreciate more physical feats, Ben Merrell of TV show America’s Got Talent fame will be performing water stunts and spectacles.  Additional activities and entertainment will take place throughout the day, with a Knox Kids zone set up free of charge outside the ticketed area.

In proper fashion to old time fireworks display, fireworks will begin at 9 p.m. and will be synchronized to a custom soundtrack from Star 102.1 FM radio. Gates for Boomsday open at 2:30 p.m. on Neyland Drive and Volunteer Landing in downtown Knoxville. The fireworks will also be broadcast by WBIR-TV for local folks who cannot attend the event.

Admission to the secured viewing area along Neyland is $20 per person. All military personnel will be admitted free to Boomsday 2014 with Military I.D.  Children under 12 are free. Tickets can be purchased at www.BoomsdayKnoxville.com. Food and beverage will also be sold at the event.

For more information on Boomsday 2014, including tips on what and what not to bring, maps, parking information and more, visit www.BoomsdayKnoxville.com.

Take a look at our recent stories